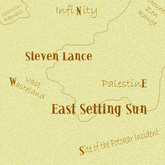 As might be expected from the title, "East Setting Sun" has Middle Eastern influences even as it contains influences of the Bizarro World we currently inhabit. It placed in the top 20 CDs of December on WVKR's "Secret Music" show. As with each previous Steven Lance release, "East Setting Sun" gives the listener improved sound and continuing compositional maturation. Featured is experimental instrument creator Ed "Tronic" Potokar playing his Delta 88 device on "The Potokar Incident." Not to be missed!

How to buy East Setting Sun

Also available at: The MP3 version can be purchased from Amazon MP3 Downloads or streamed from most digital music providers