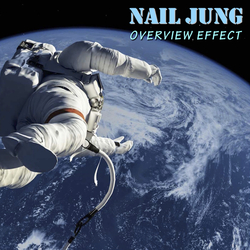 Writing, recording and performing solo is something I've continued to do throughout my 35 year career as a musician. Now codifying my electric solo works into a cohesive persona known as "Nail Jung" I will be releasing 4 albums of music this year, one for each season. The first one is "Overview Effect", released spring of 2019.

I have an enormous wealth of recorded music. And although some of these tracks are already several years old, a little spit and polish (along with some judicious editing) breaths new life into them. Summer, Fall and Winter will each see a collection of new and revised works released into the world. I hope you enjoy listening to these collections as much as I enjoyed making them. Thanks and blessings - Nail

How to buy Overview Effect