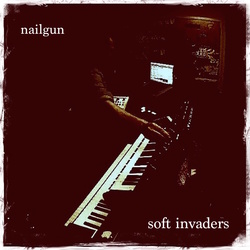 This CD represents a live on-air performance, recorded on the WPRB Radio show "Music With Space" hosted by Mike Hunter. [http://musicwithspace.com] on October 24th 2014. The music tells the story of the evolution of a new life form, one not ruled by gravity. This recording is dedicated to Steve Lawson, Allen Wentz, Nita Rae, and all the fine folks at the Electro-Music Festival. At the time of this recording, "NAILgun" was the name I used for my solo electronic music project. This has been officially changed to "Nail Jung". Credits: released January 22, 2015

How to buy Soft Invaders