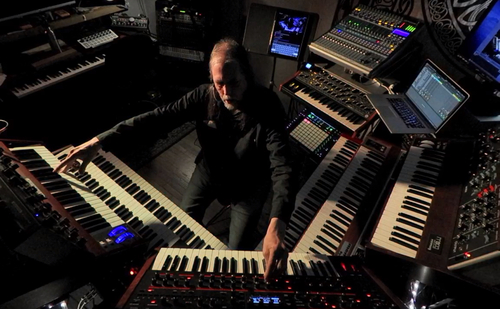 Synth wizard Neil Alexander (NAIL, Mr GONE, Decora, Thunderhead Organ Trio) broadens the landscape of Jazz & improvised music by skillfully blending modern and traditional jazz & funk forms with experimental concepts and hi tech electronic music, fusing it into an grooving, accessible sound that's mesmerizing. His latest CD is "Soft Invaders" , a live solo performance broadcast on WPRB radio. Neil performs in both electric and acoustic settings, and his tremendous original repertoire includes some unusual cover tunes from both the jazz & the rock worlds.
Starting with classical music at age 8, Keyboardist NEIL ALEXANDER fell in love with the sound of the synthesizer after hearing "Switched on Bach". It would be another 7 years before he got his first synth. From then on he spent as much time becoming an expert programmer as well as a first rate pianist. Listening to keyboard heavy bands like ELP, Yes and Genesis growing up, another significant change came when he first heard the Mahavishnu Orchestra: Jazz! Since then he has performed continuously for 30+ years. He works with music in all forms and styles from Composer/Arranger and Production of Live Sound to Musical Theater, Modern Dance and Film. Grants from NYSCA and Meet The Composer gave Neil the opportunity to continue building on his composing skills. Neil also teaches Master Classes in Synthesizer Programming and Music Performance Technology, and composes works for small ensembles. As an active musician he has recordings and/or a performance history with a variety of groups and artists such as Gunther Hampel, Tal Ross (P-Funk), Charles Haynes, Erik Lawrence, and The Adaptors Movement Theater. His classical repertoire includes works by Stravinsky, Charles Ives, and John Cage. In 2006 he retired from 10 years with the Pink Floyd Tribute "The Machine", where he was a driving force in the group's success for ten years. Absorbing influences by the music and sounds of artists such as Zawinul, Jan Hammer, Eno, Bill Frisell and Bill Evans, Neil has forged a sound uniquely his own. Currently Neil performs solo, acoustic and/or electronic (including "Scene Re-seen", live electronic scoring of silent films), and with a variety of artists including the Mahavishnu Project.

For booking, additional info and more audio clips, go to the Official NAIL Website at http://www.nailmusic.com.