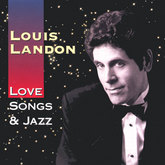 Louis Landon began playing piano at age five. At fourteen, he quit the piano and the classical music he was studying, and began playing blues and rock & roll on the electric guitar. By listening and learning from records, his new teachers were Eric Clapton, Jimi Hendrix, and B.B. King, to name a few. Then, at age twenty, after hearing "Light As A Feather," by Chick Corea, Landon enrolled in Berklee College of Music, Boston to study jazz. He also switched back to piano as his main instrument. After practicing eight hours a day and jamming with several musicians around Boston, Landon met John Payne, a saxophone player, with whom he toured for three years opening for Weather Report, Tony William's 'Lifetime', Stanley Turrentine, Gary Burton, Bill Evans, and many other jazz greats. During these years, Landon provided most of the writing for the three albums that were released, two for the Arista Freedom label and one for Mercury Records. After their release, Landon moved to Manhattan, forming his own fusion band called Nightfire, and freelancing with other bands as well as doing studio work. In the late 70's, Landon auditioned for John Hall (from the band "Orleans") and got the keyboard spot in his band. He toured with John Hall opening for Little Feat, as well as recording on John Hall's Power album for Columbia Records. After leaving John Hall's band, Landon began touring with Rupert 'Pina Colada' Holmes. From there, Landon began working for Ross Enterprises producing music for corporate shows, films, and videos. During the summers, Landon toured with Mikhail Baryshnikov, performing internationally. In 1986, Landon began taking in projects outside of his work with Ross Enterprises. His first job was a three year affiliation with Paul Gilbert at the National Basketball Association to produce music for their television commercials including their best plays and bloopers commercials. In 1991, Landon officially opened his own music production and record company called Landon Music Company. In the year 2000, Landon became an honorary "soul brother" by joining Pucho and his Latin Soul Brothers on tours to Malaysia, Istanbul, Turkey, and South America, including Columbia, Ecuador, and Peru. Discography
As a recording artist, Landon has released 16 CD's, ten of them solo piano CDs.
1994 - Love Songs & Jazz -  Landon's debut CD as a solo artist. A jazz piano trio CD with 10 songs and one instrumental.
1997 - Joyous Spirit -  A smooth jazz/new age CD with 11 instrumentals.
1999 - Feel This - A four-song pop-music CD.I
2000 -  Joyous Spirit 2 - More smooth jazz/new age.
2003 - The Gershwins, Cole Porter, & Me -  A live jazz piano trio CD taken from two different concerts and featuring Harvie S on the bass and Richie Morales on drums.
December, 2005 - Landon's new age/ambient solo piano CD.  With the title, "unwind," this CD is melodic, optimistic, and peaceful.
January, 2008 - "Peace Revolution!" his second solo piano CD.
Solo Piano for Peace, Landon's 8th CD and 3rd solo piano CD, was released on April 14th, 2009 Co-produced by Eric Tingstad, this CD was originally entitled Improvs for Peace because all of the music was improvised in the studio in real time.
Solo Piano for Love, Peace & Mermaids July 14, 2010.
Reality Not Fantasy, a singer/songwriter CD released March 15, 2011 and produced by Eric Tingstad.
Peaceful Christmas - Solo Piano was released at the end of November, 2011.
Peaceful Solo Piano from the Heart was released on October 14, 2012.
Ten Years - A Peaceful Solo Piano Retrospective was released in May of 2013.
Sedona on My Mind was released in September of 2013.
Healing PIano of Sedona for massage, yoga and relaxation was released in March of 2014.
Healing Hearts - Solo Piano was released on October 1, 2014.

How to buy Love Songs & Jazz

Also available at: Love Songs & Jazz is available at Amazon.com. You can listen to sound samples at CDBaby (http://cdbaby.com/cd/louis2)