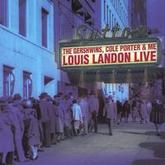 BIO:
Louis Landon is a Steinway Artist, formerly of New York and currently of Sedona, who has dedicated his life to music. His passion is for peace. His career has taken him around the world playing a variety of styles with some of the most recognized names in the entertainment industry: classical music for Mikhail Baryshnikov on national and international tours, Latin music with "Pucho and his Latin Soul Brothers" on national and international tours, pop music with Rupert "Pina Colada Song" Holmes on television and national tours, rock & roll with John Hall, opening for "Little Feat" on national tours. For the past 30 years, through his production company, Landon Music, he has written and produced music for film, video, and commercials, including three years of "best plays" and "bloopers" commercials for the National Basketball Association.

Not long ago, Landon realized that his music - the solo piano compositions that bring him so much joy and peace, could surely bring joy, and particularly peace, to millions around the world. Louis Landon is currently working with three missions:
1. To create a more compassionatel world by writing, recording and performing, music that promotes love, peace, joy & gratitude.
2. To inspire people to live joyously and passionately.
3. To awaken and to assist people in healing themselves through music and mentoring.

He has released 33 Albums/CDs on the LCI record label, his latest entitled "Solo Piano Reverence," was released on October 14, 2019.

How to buy The Gershwins, Cole Porter, & Me

Also available at: Sound samples available at http://cdbaby.com/cd/louis3 The Gershwins, Cole Porter & Me is also available on iTunes and other digital download companies.