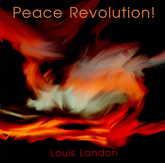 Peace Revolution! was Louis Landon's 7th CD and 2nd solo piano CD. It was #7 on the NAR top 100 charts and was played on over 50 stations worldwide. Peace Revolution! is also featured at Whisperings - solopianoradio.com with over one million listeners per month. Review by Bill Binkelman New Age Reporter.com 3/23/08

Peace Revolution! - solo piano
Landon subscribes to the less is more philosophy of sparseness of notes, but overall this is an album for those who like their solo piano music rich and full, not stark. Engineering, by Paul Hirsch, is excellent. The piano's clarity and presence is spot on. I detected neither any overt brightness nor muddiness and volume was well-modulated.The sprightly opening track, Camelot, ushers in the CD with a jaunty mood and playful melody. Early on, Landon shows that he is more than capable of playing both soft and with nuance as well as letting 'er rip and spicing things up with verve and sassiness. Sundance starts off more subdued but not overly so and also elicits a soft sensation of nostalgia. Skye's Song transitions from its softer start to pick up a little steam and drama in the middle, but quiets down again as the song concludes. Ancestors presents a stately mood, almost serious if you will, amidst a lot of the lighter fare here. Instead of being jarring, I found the change of pace to be refreshing. This cut is followed by another emotional mood about-face offering, Elegant Lady a song which evokes the atmosphere of a 1930's upscale nightclub with a hint of torch song smolder and a dash of glitzy diamond-sequin style. Amalfi Drive swings from low-key melancholy to breezy jazziness while the seven minute title track is surprisingly modest in its emotional weight with only brief peaks of drama.The album may be a "quiet" revolution, but it's one that should prove worthwhile "joining" for fans of new age solo piano music, provided they are not addicted to Winston-like minimalism, because the melodies here are seldom sparse.Review by By Michael Woodhead @ Lux Aeturna 2/12/08
Louis Landon
PEACE REVOLUTION, 2008 - Landon Creative Inc

Even though Camelot is, by far, my favourite track from this CD, nevertheless there are eleven other compositions that will entice you to hear more from Louis Landon.Light and delightful, Peace Revolution! will carry the listener to a place of tranquility and reflection to which he or she will want to return again and again.