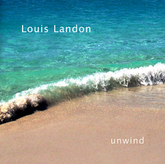 "unwind" charted at #3 of the top 100 CDs for the month of February, 2006 on NewAgeReporter.com's website, playing on over 121 stations internationally! Louis Landon on the recording of "unwind":
I am still in awe of the organic process that happened with the making of this CD. What inspired me was hearing the recorded piano sounds that PAUL HIRSCH was getting at ROSE'S LOUNGE STUDIOS. That led to five sessions of very creative composing, performing, and improvising. With the finished pieces of music I had no idea how to move forward. I was in new age music territory and I was too close to the music to put the songs in any kind of order for the CD. It was here that I had the good fortune of connecting with WILL ACKERMAN, new age guitarist and founder of WINDHAM HILL RECORDS. Will advised me on song order. He also encouraged me to take the time to edit out a short piece of music from a long improvisational piece that I had recorded. That song became "Majestic Sunrise," and it is one of my favorite pieces on the CD. I ended up having CORIN NELSEN master my project at Will's IMAGINARY ROAD STUDIOS. I am extremely happy with the results. This music is melodic, optimistic, and peaceful. Enjoy! CLICK ON THE LINKS TO THE LEFT UNDER THE CD COVER FOR SOUND SAMPLESLouis Landon is a Steinway Signature Artist and his personal mission in life is to create a more loving and peaceful world by writing and performing music from the heart. What professionals are saying about "unwind": "I loved your new CD. I just finished uploading the new show to the website, so it will be up there from now until next Sunday am. I used two pieces: "Feel" and "Alone". So, so good. I also put a link to your website under my "Musicians" links. It is such a pleasure to receive something that is this good. Music like yours keeps the bar raised higher. Thank you for giving me something worth playing. Anne Williams/Nightscapes/internet radio "The new CD is quite beautiful and I've already included one cut on this week's show at BostonPete.com" - Pat Marino/host of LegendaryVoices/BostonPete.com "I have known Louis for many years, his music has matured into a very comfortable style. His latest CD, "unwind", is warm, inviting and shows us what a fine and sensitive musician he is."
John Arrias/ Music Producer and Recording Engineer/NYC "The optimism in Louis's music made it the perfect choice for a recent film project."
Jan Ross/Director/eplanet films/NYC "...beautiful, deep, feeling and hopeful. I keep listening to it."
Richard Kane/Piano Restoration/Marin County, CA

How to buy unwind - solo piano

Also available at: For physical CDs and downloads, the best place to order is the official Louis Landon website listed here. ITunes, Amazon and CDBaby are other options. unwind - solo piano