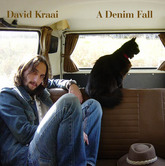 Can You Hear My Guitar?
10-21 Blues
A Denim Fall
Folk/Traditional, Country, and Singer-Songwriter
by David Kraai

In May 2004, David Kraai released his debut solo album, A Denim Fall. The concept: no frills, just pure examination of the human condition and the foundation of songwriting. The album of mellow, Sunday morning, jeans and t-shirt songs and spare, golden, countrified folk music immediately made Kraai a fixture in the New York folk scene. Regularly playing such notable venues as CBGB’s and The Sidewalk Café, invitations soon came for Kraai to pay homage to his predecessors and play at tribute festivals for Gram Parsons, Gene Clark and "Sneaky" Pete Kleinow out in California. It was only a matter of time before the rest of the world caught on and songs off A Denim Fall would begin being played in films and on radio stations as far away as Belgium; one track would even be selected for inclusion on Neil Young’s Living With War Today website as the number 2 protest song of the times. The subsequent years of touring to promote the album would see Kraai playing onstage with legends like Pete Seeger, Bill Keith (of Bill Monroe’s Blue Grass Boys) and John Simon (producer of The Band and Janis Joplin), as well as future legends like Tim Easton, and sharing bills with the likes of Victoria Williams, Dar Williams and members of The Flying Burrito Brothers and moe.

Pulse Magazine, 02/10/05, said:“David Kraai is a songwriter with an uncommon twang in his throat and a gift for sentimental imagery and his album, "A Denim Fall", is full of juicy American allusions and down-home country heartache. On "Chuck's Song," Kraai establishes the predominant attitude of "A Denim Fall," a laid-back, drowsy nonchalance that apotheosizes blue-jean cowboys who spend their days leaning against wooden fences, chewing hay, adjusting their 10-gallon hats. Kraai's guitar is sad and reflective, and the first time we hear him sing, there is an aching simplicity in his sentiment that will immediately endear most listeners. "I might be a strange you, you might be strange too, she might be stranger than you, I might be a stranger too." There is a startling sense of alienation in these opening thoughts, but when you combine the words with Kraai's emphatic vocal, it's clear that this is one cowboy who also likes to revel in his misery. It is this sort of emotional complexity that makes Kraai a potentially appealing artist, one who has seen enough sorrow to know the difference between what is bittersweet and what is truly tragic.”

How to buy A Denim Fall