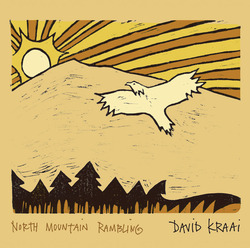 David Kraai’s new album, North Mountain Rambling, was recorded in the basement of the legendary Big Pink - a house just outside of Woodstock, New York. It’s been fifty years since Bob Dylan and The Band recorded The Basement Tapes there and this is the first album recorded and released from Big Pink since those historic sessions. Performers on the album include Dylan alumni Rob Stoner (Rolling Thunder Revue, Desire, Hard Rain, At Budokan, Live 1975) and Eric Weissberg (Blood On The Tracks, Dueling Banjos), in his final session.

David says of the album, “I had the idea to record here over a decade ago. It never left my mind, kind of like the songs that came out of this basement. It would be an absolute life-highlight to make any music in these hallowed walls, but to bring new songs into the world from this special place again is very magical. This location, these players, fifty years… it’s more than a dream come true, to me it’s the most perfect circle.”

How to buy North Mountain Rambling