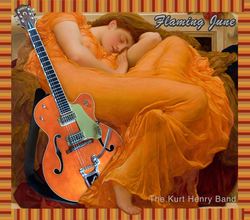 Same Jack
I Like the Light  My Advice
Flaming June
Singer-Songwriter, Rock (progressive)
by The Kurt Henry Band

“Reminds me of what I love about Richard Thompson.” –Peter Blanchette, classical/world guitarist

“The production [Eric Parker] on ‘Flaming June’ is just impeccable…It has the effect on me of falling into a lush, mossy cave. It really has a magical sound.” --Amy Fradon, singer-songwriter

Three years in the making, “Flaming June” is a departure from the four previous albums by The Kurt Henry Band. “Flaming June” is a joyous, far-reaching celebration of all musical types, from jazz to R&B, Celtic to roots rock, funk to country. It’s a musical olive branch from America to the world, emphasizing peace and unity. “Flaming June” is a prime example of old dogs learning new tricks.

“Please forget the guy with the flat-top folk guitar and notice the guy with the bright orange electric guitar,” Henry said, referring to his new musical approach on the “Flaming June” CD. “I’m growing and changing as a singer-songwriter-musician, and I ask that our longtime fans give us a fresh listen, and we wish newcomers a hearty welcome!”

Kurt Henry began singing in coffeehouses in 1968, notably Greenwich Village’s
The Village Gaslight, playing with popular regional New York bands the Womblers,
Hipshot, and Great Northeastern. Dubbed “New York’s first country-rocker”
(MusicMachine), Henry opened for legends such as Procol Harum, David
Bromberg, The Nitty Gritty Dirt Band and Asleep at the Wheel. Over five decades
and five albums, Henry has evolved into an accomplished, tone-conscious, low-
volume/high-energy electric guitarist and a singer/songwriter with a knack for smart
lyrics that splash on impact and circle out. A resident of Ulster County, Kurt Henry
performs regularly across the region with The Kurt Henry Band, in solo gigs and
with band member and life partner Cheryl Lambert.

Eric Parker: Drums, producer. Only 17 when he joined 1970s band The Fabulous Rhinestones, Parker has a career that reads like a who’s who of Rock: He played with the John Hall Band, Bonnie Raitt, Ian Hunter Band and Cornell Dupree, and was touring drummer for Steve Winwood and Joe Cocker. Parker has been with the Kurt Henry Band since 2004, performing on four of the group’s five CDs while manning the boards for the last three.

Alan Groth: Bass. A member of Henry’s previous band, The Womblers, Groth has collaborated with Kurt Henry on projects stretching back three decades. A mainstay of The Kurt Henry Band for sixteen years, Groth is deeply intimate with the repertoire from five albums. A Valley favorite for his deep and fluid playing tones, Groth provides countermelodies for many of the numbers.

Larry Packer: Violin. His career began with the famous opening act for Jimi Hendrix, known as Cat Mother and the All-Night Newsboys. Packer has recorded with legends Lou Reed and The Band.

How to buy Flaming June