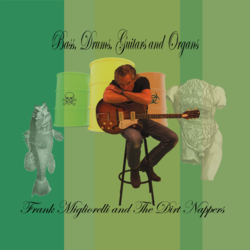 New York-based singer-songwriter Frank Migliorelli, along with his band The Dirt Nappers, is gearing up to release his new album, Bass, Drums, Guitars and Organs on March 15th. Migliorelli, who has written and produced music for advertising agencies, children’s publishers, and video games began writing and performing his own material over the past decade. “When you’ve done everything from writing music for little kids, ad agencies and half-naked guys in bowties,” says Migliorelli, “you want to step back and try something different.”
With this latest project, Migliorelli is trying something different: taking a simpler approach with his song craft, something which is perfectly reflected in the album’s title – Bass, Drums, Guitars and Organs. Throughout the varied tracks, Migliorelli aimed to capture a “live” stripped down feel while balancing acoustic and electric sounds and giving you a true sense of their live show. “I didn’t want to do a bunch of overdubs-we did as much as we could in one or two takes, and then moved on.” Migliorelli said “We focused on putting down the right parts, and resisted layering overdub after overdub-I think it worked.”
Recorded in Migliorelli’s home studio, Bass, Drums, Guitars and Organs features ten self-penned tracks infused with a solid dose of what he calls “Napper rock n’ roll sensibility.” Featuring a few old favorites, including the rollicking Great American Song Contest Finalist tune “Wound Up Woman,” as well as a new acoustic, and somber, version of “Former Femmes Fatales & Romeos,” the album blends guitar-driven rock, roots, rockabilly, and soul into one seamless collection. Opening track “When She’s Walking By Your Side” begins the collection on a buoyantly joyful note with its smooth harmonies and pop melody while “I’ve Been On My Knees,” which was inspired by the deaths of people close to him, reflects on spirituality. Other highlights include the drifting, dreamlike “Rafferty Train,” a story song about leaving it all behind and “Baby Put A Dress On” a lighthearted, sweet tune about a night at the “Firecracker Lounge” with your sweetheart. Whether musing on lost love, new love, or life events, Migliorelli’s songs will capture that all important organ…your heart.
Additionally, the album features the musicianship of Tony Tino on bass, Phil Cimino on drums, Eric Puente on percussion, Jeremy Baum on organ, Andy Stack and Duncan Cleary on guitars, Sherryl Marshal, Steve Chizmadia & Dan Pelletier on vocals, and Mike “Booker” Heaphy on steel guitar.

How to buy Bass, Drums, Guitars and Organs