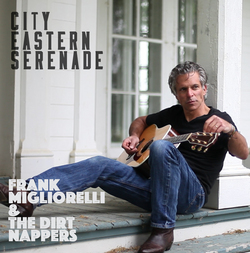 City Eastern Serenade, the debut album from Frank Migliorelli and The Dirt Nappers features original songs from singer-songwriter Frank Migliorelli. The recording features performances from a great collection of musicians including:

City Eastern Serenade features eight tunes by Migliorelli, who as a finalist in The Great American Song Competition was cited as writing with “a sturdy hunk of vintage coolness..spirited rock and roll musical style!”.

The music blog "The Daily Country" posted this review the week the album hit the streets:
City Eastern Serenade is a collection of eight original tunes that deal with relationships - the coming together and the unraveling - that mixes roots, soul, pop and country. Supported by a group of skilled musicians, the album starts off with taking a chance and finding that right person on “When We Reach The Other Side.” The Petty-esque “She Doesn’t Know” has a female questioning whether she wants to remain in a relationship while in the country flavored “And It Feels Like Chains” she finds herself attracted to another, yet is unable to act due to that "chain" - a wedding band. The sweet melody of “Down In Flames” further chronicles the demise of a relationship until we finally see her making the decision to leave on “In Her Rearview Mirror." The retro soul of standout track “Tryin’ Such A Long Long Time” and “Tied To The Tracks Of Your Love,” about not being able to quit someone even though she gives him a “one way ticket to a broken heart,” round out the album. Give it a listen.

How to buy City Eastern Serenade

Also available at: You can also find the album on Bandcamp, Spotify, Noisetrade, or even contact us directly.