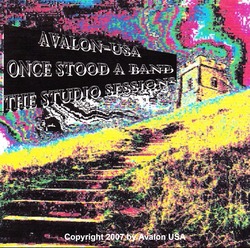 Jeff, John & Joel had been in ORION (NJ) from 1976 to 1980. They wanted to start a new adventure. Avalon had a lot of the same direction, albeit with a more heavy sound. Several songs from the old Orion band were used initially for the band to have material. Soon other material was written and eventually only 2 Orion songs maintained a steady place in the bands performances.

Captured here are 5 songs originally recorded for MCA Records, along with the rest that came after, and a bonus track (Exploring the Deep) featuring John on bass overdubbed on all tracks, featuring former Orion drummer Roger Schnur.

When the MCA submission fell through the band decided to disband, but years later they decided to record the balance of songs written that were not recorded earlier, and compile for an independent release. This is the result.

How to buy Once Stood A Band - The Studio Sessions