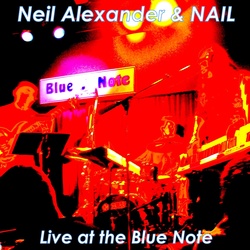 Cissy Strut
The One That Got Away  Sweet Revenge
Live At The Blue Note
Jazz, Funk, and Electronic
by Neil Alexander & NAIL

I started NAIL in 1998. We played out pretty regularly. At this time of those recording I was writing like crazy, and we played a combination of new material plus covers of favorite songs (represented here by Cissy Strut and Sweet Revenge). In 2006 I began to forge a new sonic landscape with NAIL. After being in the Machine for 10 years, I decided to walk away from that and strike out on my own. I had been experimenting with a lot of music and a lot of people and had settled on bassist Steve Rust and a hot new drummer named Nadav Snir-Zelniker. My connections from the Machine allowed me to hook up a show as part of the Blue Note's "Late Night Groove Series." We hit the stage at 1245 am. This excerpted recording shows us in a very raw and as yet unrefined state. Some of this material would end up on Tugging at the Infinite at the end of the year, but would undergo significant changes by then. I took me many years to get the mastering together but I'm super pumped to be able to finally share these recordings with you. Enjoy, and thanks!

How to buy Live At The Blue Note