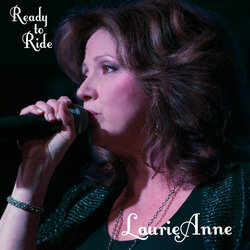 This 11-song CD consists of mostly originals. Eight of the songs were written by LaurieAnne with Fred Scribner on guitar. A remake of an old Little Sammy Davis/ Scribner song, SINCE YOU BEEN GONE, was also added to this compilation. One classic cover song, SWEET DREAMS, was redone as a power ballad to showcase LaurieAnnes vocals.
Produced by Scribner, the album has gotten airplay all over the Hudson Valley. In Feb. 2014, LaurieAnne and Fred were featured in the WHUD-FM Artist Spotlight segment for the song, TOO LATE. Another song from the album, FEELS LIKE HOME, has placed as finalist in both the Great American Songwriters Contest and the Song of the Year Contest.

How to buy Ready To Ride