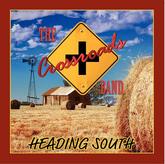 The Crossroads Band / Heading South is the bands second release with a mainstream Country sound, more so, than their debut release “Crossroads” which is Country/Blues.

How to buy Heading South