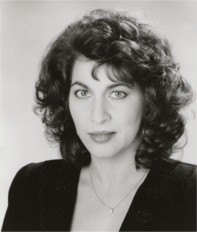 Julie Ziavras, soprano has won critical acclaim for her vocal beauty, musicianship, and dramatic stage persona in the US and abroad. Her diverse repertory includes opera, art song, contemporary music, folk and international ballads and ethnic Greek music. Critic Dr. James Cotter (Times Herald Record) said she "masters the most difficult instrument, wowing her Montgomery listeners with her warm and compelling voice, appealing presence and wide range of repertoire…. pour(ing) her full energy into each number with virtuosity and verve." A New York Times reviewer described her as "an estimable vocalist… with a silvery voice… she held the spotlight alone". Her performance in the title role of Offenbach's opera La Perichole with the Delaware Valley Opera was described by Tom Kane (The River Reporter) as a "tour-de-force performance... a commanding voice and an energetic presence on stage.”Classically trained, Ms. Ziavras holds a BM and MM from the Manhattan School of Music and has performed in concert, on radio and TV in the US and abroad. She has coached with Metropolitan Opera conductors including George Schick, Alberta Masiello. Recently heard in the roles of La Mimi (La Boheme) and Donna Anna (Don Giovanni) with the DVO and as Rosalinda (Die Fledermaus) and Julie in Show Boat (Opera Company of the Highlands) and the Countess in Mozart's Marriage of Figaro (Festival Theatre of NY), she has a appeared in the New York area with the Newburgh Synphony, Manhattan Camerata and numerous venues including Carnegie’s Weill Recital Hall, Lincoln Center's Bruno Walter Hall, Symphony Space Theater, World Music Institute, Guggenheim Museum in Soho, Alternative Museum, Grand Montgomery Chamber Music Series, Warwick Master Arts Series, Greek Cathedral Concert Series, and radio broadcasts on WBAI, WNYC, and WJFF. She has premiered many works written for her voice, including a vocalize written for her voice entitled New Millennium which remained in the number one spot on mp3 in the opera category for nearly three months and is now featured in their Hall of Fame.She has toured extensively abroad, with appearances at international festivals, concert halls, radio and television as a specially invited solo performer. She has recorded and toured with prominent Greek composers including Notis Mavroudis and renowned composer/music director Manos Hadjidakis, who invited her to appear in high profile concerts and live broadcasts on ERT Greek National Radio, in a repertoire including opera, lieder, Renaissance song, Greek song and contemporary music. This included a premiered work at the Pireus National Theatre that was simulcast on national radio. Selections from her solo CD Simply Mavroudis were premiered with great success on a concert tour with Greek composer Notis Mavroudis originating in Greece and culminating in Serbia. It was the first time a western artist performed there after the collapse of the Soviet Union. The National Museum in Belgrade was opened for the occasion and the concert was simulcast on Serbian National Radio and Television. These songs represent the only collection Mr. Mavroudis has written exclusively for one singer. She was the creator, co-founder and featured soloist of the music café and touring ensemble Café Acroama in Astoria, NY, which brought Greek art song to a vast audience throughout the U.S. As part of the acoustic folk duo Ken and Julie, she appears accompanying herself on guitar in a repertory of traditional folk and original songs written by her husband, singer/songwriter Ken DeAngelis. In 2005, Ken & Julie completed a concert tour with Broadway Concerts Direct of theaters in six cities in Nova Scotia, with a repertory which included opera, art song, Broadway, international and folk music. A review of Ken and Julie's recently released debut CD The Dream in CDReviews.com states: "The pure talent of DeAngelis and Ziavras combine to generate some real gems, sparkling with energy and life."