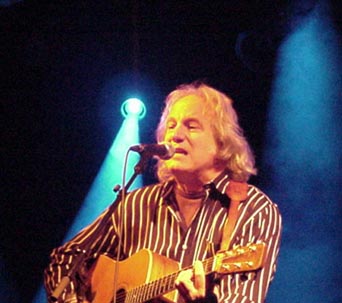 Singer/Songwriter, Peter Sando emerged in the late 60's from the band Gandalf, formerly the Rahgoos prior to the LP release, appearing at various New York clubs such as "The Phone Booth", Scott Muni's "Rolling Stone", "The Electric Circus", Murray the K's "World", and the legendary "Night Owl Cafe" in Greenwich Village. It was there that he met songwriters Garry Bonner and Alan Gordon ("Happy Together", "She'd Rather Be With Me") who brought the band to the attention of record producers Koppelman & Rubin. K&R signed the band and immediately started work on the GANDALF album which was released on the Capitol label in 1969, with two songs penned by Peter. "Can You Travel in the Dark Alone" was a favorite of the late Allison Steele, "The Nightbird", on WNEW-FM New York, who would introduce it with a lengthy dose of her inimitable psychedelic poetry. Unfortunately, the band broke up in 1968 before the original LP was released. At that time Peter again teamed up with Bonner and Gordon to sing lead on two singles including their "Dance at St. Francis" as the Barracuda on RCA which charted briefly in 1968. Four original songs were recorded at Brooks Arthur's 914 Studios in 1971, but lay unreleased until the recent GANDALF 2.

"Creatures of Habit", the first solo CD by Peter Sando was released in 1999 on High Point Records. Comprised of all original material, it featured JOHN BROWN, ode to the militant abolitionist who sparked the Civil War, and DESERT FLOWER, which Peter describes as a "Native American lullaby."

The Gandalf LP, after having been bootlegged several times (including a picture disc and a blue vinyl version) was legitimately re-issued on CD by the UK based See For Miles label in 1991, and more recently, in the USA on the highly rated Sundazed.

A new GANDALF album, Gandalf 2, consisting of rare outtakes, unreleased demos including the "914 Tracks", and live recordings from Peter's personal archives circa 1967-1973. It was released on Sundazed CD and deluxe Smokey Topaz colored vinyl LP.

And in 2011 we have the new CD, Afraid Of The Dark, featuring "Sally Hemings," which examines the affair between Thomas Jefferson and his slave mistress.

Peter's continues to write and perform his songs throughout the New York/New Jersey area folk circuit.