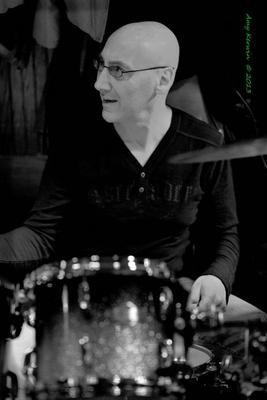 Drum Instruction in Your Home - Rockland/Bergen
Mr. Raymond Portante has been influenced by an eclectic group of drummers including Ringo Starr, Buddy Rich, John Bonham, David Garibaldi of Tower of Power, and Steve Gadd, drummers who exemplify the importance of "feel", which is the most inherently necessary function of any drummer.
His initial formal drum training began with a Rockland County, NY instructor named Nick Page. Mr. Page was a product of the "swing era" and taught him how to "drive" the music. Luckily enough, while attending Berklee College of Music in Boston Mr. Portante had the opportunity to study with Gary Chaffee, head of the percussion department. It was while studying with Mr. Chaffee that he began to dig deep into the "soul" of drumming. After leaving Berklee Mr. Portante attended "the school of hard knocks". West 30th in Manhattan was littered with recording studios. It was there that he really began to understand the "art" of drumming. While spending approximately 10 years recording various jingles, industrial films, state sponsored commercials, television ads, and artist demos Mr. Portante learned that oftentimes, especially when it pertains to drumming, less is more.
Teaching is a way of life for Mr. Portante. Not only is he an accomplished and experienced drum instructor, working with both beginners and seasoned drummers, he is also a certified 6th Dan Master in the Korean martial art of Taekwondo. He owns and operates East Coast Martial Arts in Chestnut Ridge, NY and often applies the same basic teaching principles to the instruction of both arts. His basic premise is that his job is to simply pass along his knowledge and experience from one generation to the next, whether it be the next generation of drummers or the next generation of martial artists. It is then that the student has the opportunity to process, digest, and form their very own individual artistic style.
Currently Mr. Portante performs throughout the tri-state area with a Nyack based classic R&B band called "The Unit". When he's not performing with his band he has the good fortune to be asked by other musicians to do both live performances and studio work.
For Rates and Availability please contact me at:
summerrainman@aol.com