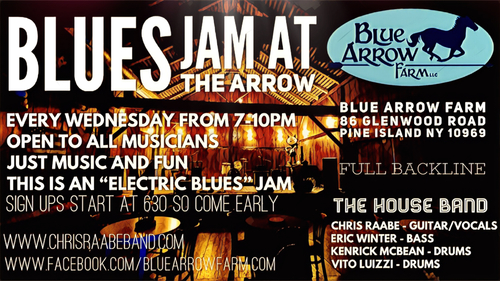 Blues Jam at “The Arrow” With The Chris Raabe Band
Dates: Every Wednesday From 7-10 Sign ups start at 630 so come early and get a seat!

Join us! Every Wednesday evening, we will be hosting a brand new blues jam at the Wonderful Blue Arrow Farm in Pine Island, NY. Open to all musicians and a full backline. Show up , Sign up and play in a jam setting. While this jam is not limited to blues , it is being put together in the spirit of the electric blues so please keep that in mind. This is a jam about love a respect for each other so lets have some fun! Any questions at all feel free to message Chris Raabe. music kicks off at 7 and sign ups start at 6:30 so come early have a beer and enjoy this beautiful new venue!

The House band Chris Raabe (Guitar/Vocals) Hudson Valley’s very own “Guitar Hero”,Chris Raabe, has been moving and entertaining audiences for over a decade. This passionate artist has roots in genres of Soul and Rock however, when it comes to the Blues Chris is in a league of his own. Time and time again he delivers soulful and colorful performances that keep his listeners on the edge of their seats. Chris captivates his listeners with harmonious guitar playing and unique vocal qualities. Gathering influence from an array of different artists and genres, Chris has developed his own unique sound. His music offers a front-row seat to blues-based emotions further revealing his message that music is spiritual and has the power to influence and transport the listener. Chris Raabe has had pleasure of opening for the great Leon Russell , Eric Gales , Slam Allen , Nick Moss , Jake Holmes , Little Sammie Davis and members of The Frank Zappa Band, among others.