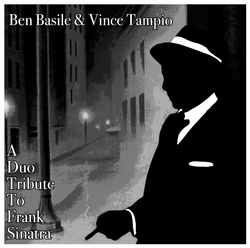 The duo’s debut release “A duo tribute to Frank Sinatra” by Ben Basile & Vince Tampio is available digitally November 5th, 2015. The duo records and performs a repertoire of Jazz standards made famous by Frank Sinatra; reducing the big sound of Sinatra’s group to a mellow instrumentation. Physical copies of the album will be available at the album release shows November 27th & 28th.

How to buy A Duo Tribute To Frank Sinatra