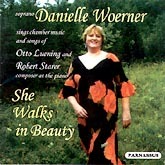 Music by two of America's great 20th century composers for the voice, sung by "a uniquely gifted artist in her glorious prime" (Classical Singer Magazine). Danielle Woerner worked closely with both Luening and Starer on their music over several years. The stellar list of supporting arists includes Robert Starer himself on piano (in his only commercial recording as a performer), the Hudson Valley String Quartet, clarinetist Jean Kopperud, flutists Marcia Gates and Patricia Spencer, and pianist Sylvia Buccelli.

With a 24-page booklet including texts, bio's, photos, and an essay on Otto Luening by critic Tim Page. Recorded, mixed and edited at Tom Mark's studio in Ulster County. The recording format was ADD, with the acoustical recording phase adding warmth to the CD.

Issued by Parnassus Records (now out of business), it's available directly from the artist through her Etsy store: https://www.etsy.com/shop/SunriseSongStudio


CLASSICAL SINGER MAGAZINE:
"DANIELLE WOERNER'S THRILLING CONTEMPORARY DISK"[ headline]
"...an extremely important recording. Important because it gives us an unmistakeably authentic 'from the horse's mouth' view of some ravishing modern vocal music...and important because it captures a uniquely gifted artist in her glorious prime. ....
"These are fascinating songs with staying power...moon music, secret garden music....that spins a light yet firmly grounded spell.
"Ms. Woerner's voice is pure and sweet across an incredibly wide compass. Her use of it conveys innocence with a guileless directness of expression. Her superb musicianship and the soundness of her vocal method enable her to execute the odd intervals with perfect intonation and strike clean attacks on the highest notes with no strain whatsoever. While singing with absolute instrumental purity of tone and rhythm, she speaks the words in a totally intelligible, directly conversational manner.... Having all of these qualities present in one interpreter must be beyond gratifying for her composers. It certainly is for the listener...Don't miss this one."
- Freeman Günter


FANFARE:
"Woerner has a high, bright soprano of considerable technique along with perfect diction....all of the singing is quite lovely, and the soprano's various accompanists do an equally fine job in what is obviously a labor of love...
Recommended." - John Story


MUSICWEB - CLASSICAL MUSIC ON THE WEB
"Parnassus and Woerner have done each other, the composers and the listeners proud. I hope that Woerner will go on to record other rare Americana."
- Rob Barnett


THE PHILADELPHIA INQUIRER
"Otto Luening (1900-96) was a father of electronic music but also a composer of more traditional works....The writing is spare, direct, transparent, and the effect of the poetry enlarged through thoughtful singing and playing.
Four Emily Dickinson poems and three by William Blake are highlights here. Luening's music slips inside the brief Dickinson poems, making a few seconds of music glow like flowers. Danielle Woerner's singing of them is alert and infused with the right lights...
[Starer's] eight 'Images of Man, with flute and cello, summarize the skill and expressive simplicity that mark the best of his work." -Daniel Webster

How to buy SHE WALKS IN BEAUTY: Danielle Woerner, Soprano