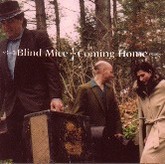 "...a killer collection of original songs that have the lush, easy feel of the best early-'70s pop. There are many instant classics on this CD." -- Todd Paul, Chronogram. "Right from the start, the dazzling harmonies and acoustic arrangements hark back to some indescribable earlier time. Great vocals and wonderful harmonies form the core of this recording, powering a collection of original songs that range from folk to the blues to acoustic rock." -- Philip Farber, Daily Freeman. "Sons of the pioneers could take blended lessons from this trio if they weren't already underground, and frankly Blind Mice have more fervor." -- Cat Ballou, Woodstock Times. "Scofield tells ballads like they happened just yesterday, taking you to their soul-center in a voice that's clear and smokey, at once. Veillette is the band's humane optimist. Whether his love songs are requited or not they cheer you up. McDonough is the poet-warrior whose flowing bassline encompasses articulate instrumental play, with the voluptuous pulse of Pacific waves wrapping some island paradise. His tenor-range vocals are fervent, but it's the gentle power of the man, his tenderness, that hangs in memory." -- Kitty Montgomery, Daily Freeman.