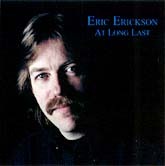 Consisting of 10 of Eric's originals and highlighted by his wry take on the Beatles' "I Want to Hold Your Hand", this CD is a pristine, spare gem. Eric's own performances are complemented by those of acoustic guitar wizrd Artie Traum, former Lovin' Spoonful frontman John Sebastian, fiddle virtuoso Jay Ungar, and extraordinary cellist Abby Newton, among other fantastic Woodstock musicians. "At Long Last" prompted The Woodstock Times to refer to Eric as "...the embodiment of the American singer/songwriter."

How to buy At Long Last