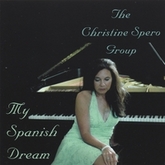 My Spanish Dream
Jazz, Latin, and Contemporary
by THE CHRISTINE SPERO GROUP

This CD was a joy to record as it includes songs that are especially close to my heart. The title track, "My Spanish Dream” is a song of longing. Spain is among the places I’d love to see and the visions that I have of it from Spanish literature and music are often on my mind. I hope that the imagery leaves the listener with the same warm feeling I have. "Don't Say No" will really get you dancing with the samba rhythms and the vocal soli was so much fun to record! "Caribbean Nights" was a Finalist in the USA Songwriting Competition. It can also be heard on "We Call It Music" but we kicked it up a notch with some voices and a steeldrum track. A journey across the country on mountain bikes by my son, Jake and his college friend, Dave, led me to write “Just So You Know”. They traveled from Buffalo, New York to Burbank, California, pulling 65 lb. trailers to raise money for Cradle Beach, a camp for handicapped children in Buffalo. I lived that trip through Jake’s eyes and in the back of my mind I kept what he told me of his experiences. The vivid pictures he’d leave me with after each phone call home later came out in my song. It is dedicated to them and their amazing feat.I was asked to perform for a 9/11 Memorial on the one year anniversary and I felt that I needed to write something which expressed my feelings about that day. Having been so affected by what happened, I wrote “A Prayer”. Each time I listen to it I tap into the same emotions that I felt that day. “Raiisha” is a piece that I wrote several years ago and never recorded. It resurfaced last year and we played it a few times and then let the tape roll. It is unique in it’s spontaneity. "Therapy" has been published by Wild Whirled Music for use in film and television. The players on "My Spanish Dream" are: Christine Spero-vocals/piano/synths Elliot Spero-saxophones and percussion Mike Woinoski-bass Jody Sumber-drums The December issue of Recording Magazine featured Christine in their Artist Profile. This can be viewed at: www.taxi.com/transmitter/0611/headlineB0611.html She is the Winner of the USA Songwriting Competition in the Jazz category for her song, "He Wasn't Always That Way". The Christine Spero Group was one of the headliners at The Greater Hartford Festival of Jazz in July 2006 and will be returning in the summer of 2009. They have also opened for such notables as: The Woody Herman Orchestra, Kim Waters, Walter Beasley, Blood, Sweat & Tears, Ray Vega, Bobby Matos, Steve Davis, Clark Terry, Mike Phillips (from Prince), pop icon of the 60's and 70's-Melanie, Andrea Brachfield . Christine has performed on Time Warner Cable's "Poughkeepsie LIVE!" and has been written about in USA Today, Billboard, Jazz Times, Keyboard and Recording Magazines, ASCAP Playback.

Christine is the granddaughter of classical pianists. She recorded her first songs on RCA as a teen, then moved from New York to San Francisco to further study music and botany. She was a member of Bob Braye's Peace and Rhythm Unit. Her eclectic and personal style of composing was influenced by many classical and jazz musicians. She has performed with her own quartets and sextets ovover the years and now lives in the Catskill Mountains of New York, where she continues to write, record, and perform with her band.

Saxophonist, percussionist and producer Elliot Spero founded his own ensembles in San Francisco and opened for Bobby McFarrin in the Bay Area. He engineered and produced Christine's CD's, "We Call It Music" and "My Spanish Dream" and owns a recording studio in New York.

How to buy My Spanish Dream