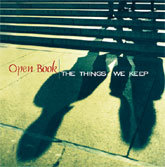 The Things We Keep
Contemporary, Pop/Soft Rock, and Folk/Traditional
by Open Book

Richard Cuccaro, editor of Acoustic Live Magazine says, "Following their auspicious debut album, "Out of Time," Rick Gedney and Michele Rubin have racheted things up several notches with their second album, "The Things We Keep." Right at home in the middle of a masterful mix of instruments, we hear the finest country/folk/rock harmonies since the Everly Brothers. Rubin's glass-like purity mixes perfectly with Gedney's soft delivery alongside a tastful mix of swirling slide guitar, mandolin, and atmospheric piano and more. The songs range from doubt to devotion, but are handled with conviction throughout. Richard Cuccaro -- Acoustic Live in NYC"The Things We Keep, like its tuneful predecessor, 2002's Out of Time, is an engaging amalgam of harmony vocals, tasty folk rock, and, most importantly, intelligent and astute songwriting that fully realizes that whatever the two songwriters are living through, most of their audience has also experienced." Mike Jurkovic, Chronogram Magazine

How to buy The Things We Keep