html
html
8:00 pm to 10:00 pm, Thursday October 6
concert
with The Man In Black a Tribute to Johnny Cash
Country 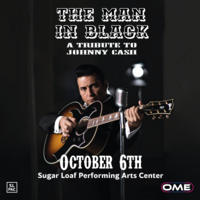 Born and raised in a working class suburb of St. Louis, Shawn Barker took a schoolboy love for singing in church with his family and turned it into a career, a one of a kind tribute to Johnny Cash, one of America’s greatest musical icons. Universally considered the pre-eminent Johnny Cash tribute artist, Barker has an uncanny resemblance to Cash. His strikingly similar looks, voice, and spot-on mannerisms revitalize the true character of Mr. Cash himself, and have led Barker to an immensely successful career performing his tribute to the original “Man In Black”.
Buy Tickets