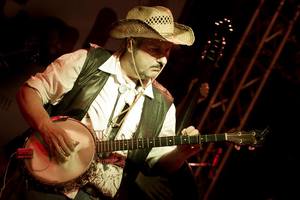 LIV GARD aka Livio Guardi was born in Florence, Italy, where he still lives and teaches music. He has been singing and playing guitar, five string banjo, mandolin and other folk instruments for about twenty years. Liv has been greatly influenced by American Folk and Blues as well as by Celtic music. He also writes many original tunes which seem to bridge the gap between the musical styles of the Mediterranean and those of Northern Europe. Liv Gard has toured extensively throughout United States, Italy, Germany and Japan, playing in such diverse situations as venues, festivals, TV Networks, radio programs and clubs. Recently featured in an article on the “Bluegrass Europe” 2015 Summer Issue Magazine, (official European Bluegrass Magazine), Liv is now becoming recognized on the international circuit as a one of a kind One Man Band.
Buy Tickets Here