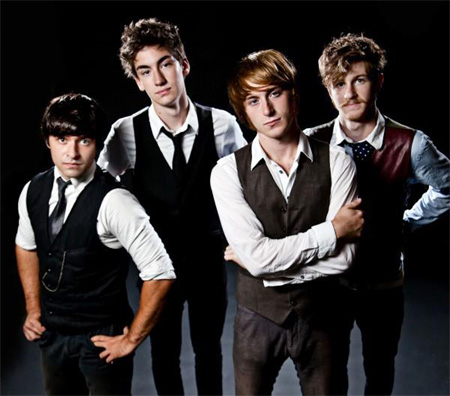 The Rhodes  ... is a Band performing Rock (classic), Motown/R&B, and Blues music.

The Rhodes perform 45 minute to 2 hour shows comprised primarily of their own original songs, influenced by the Rock 'n' Roll and R & B hits that once electrified radio. They also include select covers that can range from Etta James and Ray Charles, Johnny Cash and Chuck Berry, and Buddy Holly and The Beatles. After forming in the Fall of 2006, they built a solid foundation for their performances through long songwriting and rehearsal sessions. Living together in 2007, they survived the steaming crucible of a NYC summer -- busking in Washington Square Park by day, and playing clubs from the LES to Brooklyn by night -- to promote their self-produced EP, "Breaking and Entering". They returned to their home base in Ulster County, and Won 2007's Third Annual Garage Rumble at the Bearsville Theater. This lead them to a November 15, 2007 appearance on Time Warner Cable's Poughkeepsie Live program, reaching into the homes of five counties within the Hudson Valley region. With a constant stream of steady gigs throughout 2007 and 2008, they built a reputation for their harmonic and energetic shows. The fruit of their work was the release of their indie debut CD, "Modern Sounds of Northern Towns" at the end of June 2008.The Rhodes' solid performances continued in the Hudson Valley and Metro NYC, to the point where they became regulars at such venues as The Muddy Cup, Fat Baby, Don Pedro and The Bitter End. When original bassist, Nick Imperial, was wooed away by the siren song of a Burlington Vermont Lake Monster, The Rhodes quickly pirated away bassist Vince Apuzzo from Wallkill’s Passionately Bland. [That’s the name of a local band, not a cynical commentary on the residents of Wallkill.] Needless to say, The Rhodes didn’t miss a beat.Hard earned success continued into 2009, as the band won a slot in "Join The Jam," WDST Radio Woodstock's contest supporting their annual Mountain Jam at Hunter Mountain. This resulted in The Rhodes' opening performance at Mountain Jam V. Performances have expanded to include gigs in Long Island, New Jersey and Pennsylvania. The culmination of their success to date included appearing on the FOX Network's syndicated show, "Fearless Music", and being chosen by an independent panel of judges as the 2009 Winner of the annual M.E.A.N.Y. Festival in NYC.As 2011 began, The Rhodes decided to move ahead as a two-man unit with their core of vocalists/songwriters Derek and Dave, and utilizing a core of 3 additional backup musicians for live shows. With their continued focus on vocal-driven songwriting that combines the best of old and new styles, The Rhodes are finally coming to the attention of some "big names" from the recording industry. The future looks bright, so put on your shades and keep watching to see what happens next!Here's what others are saying:"The Rhodes are Beatlesque" -- Rumble organizer and founder Kristin Garnier, The Daily Freeman"Unabashed in their love for beat music, The Rhodes bring it back with youthful vengeance. The quartet—Derek Daunicht on larynx and guitar, David LaViola on vocals and drums, Robb Sciortino on treble guitar, and Nick Imperial on bass—pays musical tribute to heroes like the Fab Four and Gerry and The Pacemakers with sweet vocal harmonies and twangy tunes." -- DJ Wavy Davy, Chronogram, Nightlife Highlights Visit us on our myspace page. Friend us on Facebook. Better yet, come out to see and hear us at one of our upcoming shows! The Rhodes are managed jointly by Toby Ludwig at 21st Century Artists [ http://www.21stca.com ] and Matt Ramone at P.R. Music Management.

Videos
No Other Lover