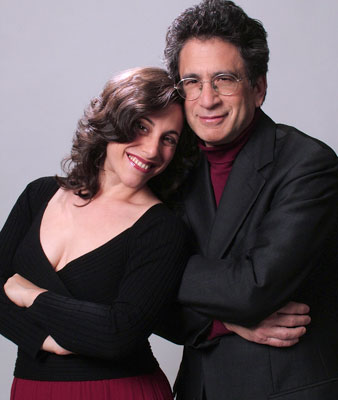 Jennie and David interpret the standards -- Cole Porter, Irving Berlin, Rodgers & Hart & Hammerstein, the Gershwins -- in a series of intimate cabaret shows that combine sophisticated original arrangements with engaging patter. In addition, the versatile duo write their own satirical cabaret songs, in the grand tradition of Tom Lehrer, and Dave Frishberg, tackling topics as diverse as driver-recognition technology, the TV Food Network, and that blushing starlet of women's underwear, the thong. They have also made forays into folk and traditional music, appearing with Jay Ungar and Molly Mason in a program of Americana, and with Celtic trio Ferintosh (featuring cellist Abby Newton), where they put their unique stamp on the traditional songs of Scotland. Other shows include The People's Cabaret, a survey of 150 years of leftist song, and The Sixties Cabaret (with Hudson Valley artists Danielle Woerner and Neil Herlands, exploring the wealth of popular-music genres that thrived in that changeful decade.