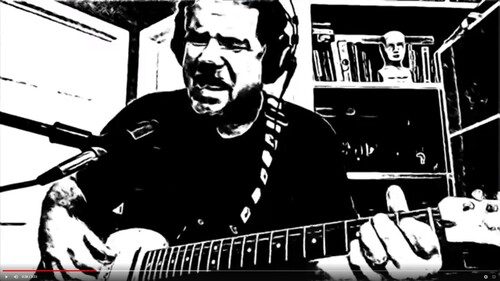 Robin Gunns worked for Blues reissue legend Nick Perls and his Yazoo Records label as a teenager. It was there that he first fell victim to the voodoo guitar strings can cast under the spell of demon fingers. No flat picks, thumb or finger picks, just raw flesh and nails on steel and gut, gorgeous twanging to the howling of wolves and beasts, with faces of men and women, raging out of boxes of tweed, wires, smoking tubes and pedals . . . into ears that bleed for more. With the help of a '57 Martin 00-18G he regularly bogarted off his old man, Robin descended in a sunken place to study the dark arts of the fingerboard. They say Robert Johnson sold his soul; Robin Gunns gave his freely.

From the 78 RPM record era, to Chicago blues, rockabilly, folk, British invasion, and Top 40 radio that brought together the best pop sounds from Motown to Memphis to Nashville to Haight Ashbury - Robin Gunns blends these influences into compositions that are musically rich, lyrically irreverent, and true ear worms. Long-time Nashville/Texas session guitarist Rick Gordon calls Robin Gunns’ work “the epitome of unique … it’s got bits of genius … and should be heard by a lot more people. I recommend everyone have a good long listen” (ReverbNation).

Robin was a member of Diane & The Short Boys, Joe Papp & The Smears, and Dr. Geedznak & The Tupperware People. He performs in the New York area with talented local players. His original compositions are recorded with his occasionally-assembled band, The Flesh Ripping Weasels. Recordings are available on major distribution platforms (robingunns.bandcamp.com, use discount code REDRUM), and these as well as Youtube and Instagram videos of performances are all linked through his website, fleshrippingweasels.com.