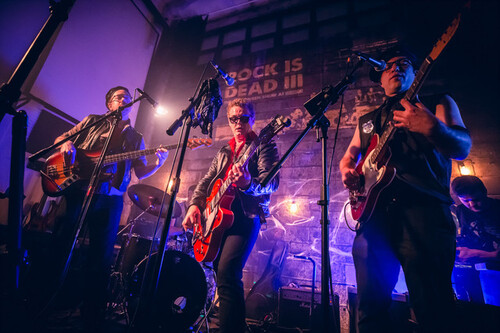 MAMA JUKE is a gumbo of New Orleans influenced blues, blue-eyed soul, funk, and folk. Actor/singer Elijah Bridges brings elements of bluegrass and rag with his soulful harmonica, acoustic guitar, and voice. Amos Rose is a world traveling multi-instrumentalist who also sings and plays lead Telecaster guitar, and was recently featured by Jazz at Lincoln Center. Brendan O’Grady is an in-demand session musician, and fixture on the greater New York scene since his roots growing up in Yonkers. Drummer Jon Wert is a sought-after musician in the NYC, collaborating with a wide variety of artists in the jazz, rock, pop production shows and songwriter worlds. The result is a four-part-harmony freight train just a-hummin' down the rails. The band has original music as well as a crowd-pleasing repertoire of cover songs. They've held a weekly residency at East Village Social, a St. Marks music hub in the heart of the East Village, since September 2015.

After constantly hiring each other for countless gigs, the band's four founding members played together for the first time at East Village Social for a one-off gig. After turning a house party into a block party, MAMA JUKE were promptly offered the weekly spot, and decided to unite permanently. The Village Voice once reviewed our show as "a party volcano!"

Continuing since that fateful September in 2015, the boys can be found on Tuesdays at EVS. MAMA JUKE has played gigs for audiences of all types all over New York City, including several other residencies. Mama Juke is well-versed in providing unforgettable shows for weddings birthday parties, festivals and corporate events. We are currently booking other venues all throughout the continental US (and beyond). If you are interested in MAMA JUKE please email us at MamaJukeMusic@gmail.com. And good on ya.