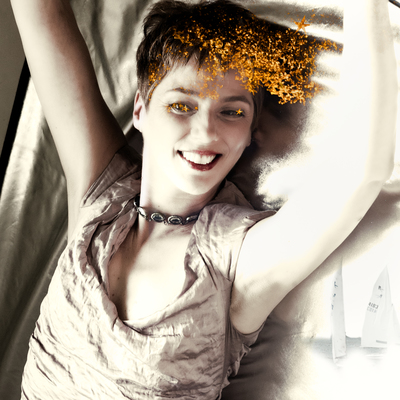 When you have been described as "a German-born, Parisian chanteuse, with Brazilian styling’s, who is a cross between Ute Lemper, Mireille Mathieu and Tania Maria," it's hard to live inside any musical box. Gabriele Tranchina traverses the world of vocal jazz, Latin and Brazilian music, sprinkling it with colors of every hue from places far and near. Her solid technique and sensitivity for lyrics give her the ability to express herself with confidence and ease and to transform each song into something not quite like anything else. Her ability to use rhythm, resting underneath her vocals, surges the music forward, keeping it alive in each moment. She is comfortable singing in German, Brazilian Portuguese, Spanish, French, Italian, and English, so a strong international influence is never far away. Her vocals, which have been called "impressive," "technically perfect," and "just breathtaking," caused jazz legend, Mark Murphy, to say "Gabriele sings like a bird and swings and swings until the cows come home."

Gabriele grew up in Germany but left home at an early age to travel, journeying throughout Europe and the Far East, gathering experiences that influenced her tastes as an artist. Gabriele has been touched by the work of a wide range of artists including Antonio Carlos Jobim, Flora Purim, Ella Fitzgerald, and a range of distinctive artists from American soil and foreign lands. Upon arriving in New York City she settled into the jazz community, becoming a welcome member there along with her husband, noted pianist, arranger and composer, Joe Vincent Tranchina.

Gabriele now sings throughout the Tri State area with her musicians and visits Europe annually for a tour of major cities where her reputation as a well-respected, popular jazz and world vocalist continues to expand each year.

She combines those many influences into her own brand of expression, expansively and freely, pouring her heart into each song, always with a clear point of view to communicate.

In recent years her albums have covered traditional tunes, new compositions (mostly by her husband, Joe Vincent) and world music of all eras. They have been received with abundant praise and have further established her as a singer of the highest order, working with musicians who are as much respected by their peers as they are celebrated by the public.

Gabriele's warm and inviting personality shines throughout Of Sailing Ships and the Stars in your Eyes (Rainchant Eclectic Records RER1001, Oct 2017). One can sense her love of singing and of music, of life and of community, making the songs on this album truly special. The music in Of Sailing Ships and the Stars in your Eyes lets us discover a woman who is in full flower of her artistic gifts, in command of who she is as a singer, what she wants us to know about her music, and invites us to join her on a magical ride that will leave us changed in a very good way. Gabriele sings as if we were with her at sea, bobbing up and down through all manner of life's encounters, good or bad, plus or minus. She generously invites us to navigate her beautiful waters of sound and be gently rocked in the entire experience until we float into vocal heaven.


Wild is the Wind