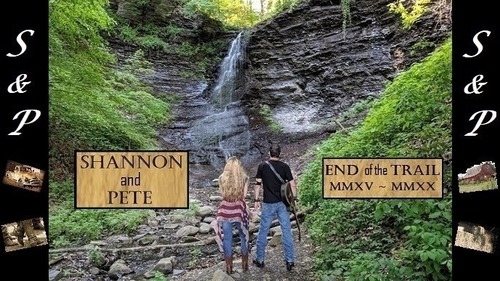 With both hailing from the Hudson Valley in New York State, Shannon Sperl and Pete Stott have known each other for years, though this project only became official in December of 2015.

Earlier, in 2014, the two had made plans to record together. While that didn’t pan out at the time, they did perform a duet together for the first time that summer at The Chance in Poughkeepsie, NY.

The next summer is when it really began. Shannon enrolled for her first year at the elite Berklee College of Music in Boston. Pete was newly performing as a solo acoustic country act. The pair decided to try something out. On August 22, 2015 the duo, not yet known as Shannon and Pete, played a 7 song set of country covers (save for what has become their staple closer; KISS’ Rock and Roll All Nite) at Dermot Mahoney’s Irish Pub in Kingston, NY. It became immediately clear that this would most definitely work!

Met with tremendous enthusiasm, five more shows were scheduled at Dermot’s over Winter and Spring breaks. Showcasing Shannon’s amazing voice and Pete’s unbridled enthusiasm, these were expanded into three hour performances of 30 songs and laid the foundation for what you know as Shannon and Pete today.

With boots still firmly planted in their roots at Dermot’s, the Summer Tour of ’16 took the act to many new places in front of many new people, including an inaugural wedding performance! A typical show has been extended to 40 songs.

2017 more than built on the excitement. Topping the list was performing on the Rip Van Winkle Hudson River Cruise for the first time!

The exhilarating ride continued throughout 2018, adding the Angry Orchard Wolf Cider Jam and first major radio interview to their resume’.

As promised, 2019 scaled even further heights, including the first Shannon and Pete appearance at the acclaimed Rosendale Street Festival. The End of the Trail tour will bring us to many new places and new fans.

Since 2015, Shannon and Pete have been sharing our love for Today's Country with a Rock 'n Roll attitude with all y'all! At the end of the fifth year of our five year project, we have reached the End of the Trail. Thanks SO MUCH for all the love and support!

Baby It's Cold Outside