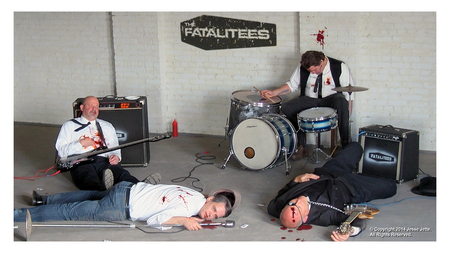 The Fatalitees were formed in 1979 by bassist Ronnie Rutt while in High School in Wappingers Falls, NY. The initial lineup included schoolmates Earl Lee Death on drums, Phil DeBottle on guitar and from rival school, singer Pete Moss. After three months of practices, Phil got DeBoot (he was an exchange student from Belgium and was preparing his return). Mutant took over on guitar. This lineup would remain unchanged until the band took a break in the summer of 1983. The fall of 1982 saw the release of their first cassette album, Yeah, Right. A mix of traditional humorous punk rock and the newer hardcore sound. The 17 song tape received reviews from fanzines all over the country. Some reviews were even favorable. These reviews led to contacts with other independent “new music” types and spots on two tape compilations. “I Hate Girls” and “$3.03 Plus Sales Tax” were used by Chainsaw Magazine’s OHMIGOD Hardcore compilation with the bands, Cracked Actor, No Thanks, Russian Meatsquats, among others. “I Think It’s Time for the Bomb Again” was included in The Other #2 along with the bands Game Theory, Lester Bangs and the Delinquints, Zoogz Rift, John Trubee, Rebel Truth, Jandek, and of course, plenty of others.