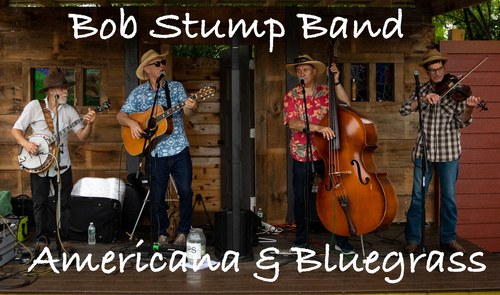 Singer songwriter Bob Stump performs Americana music . His music is a hybrid of sounds, covering great guitar styles from the likes of Doc Watson, Big Bill Broonzy, Robert Johnson, Merle Travis, Jerry Reed and other greats. He combines this with his own high energy picking and story telling. His songs are played on XM Radio and a few have publishing deals in Nashville. The troubadour has played hundreds of gigs and shows from Montana to Austin, Nashville, New York, New England and the Adirondacks. At home in concert, small venues ,bars , honky-tonks, campfires or living rooms. his motto these days is "have guitar will travel" He has recorded 3 Cd's and is working on a 4th. His latest release is Stumpgrass Live.

Fiddler Doug Moody is a classically trained street seasoned musician. The result is a very exciting combination of sounds. Doug has toured with numerous bands over the years from the south to north and across the pond. Performing in Austin , New Orleans, New York and Paris as well as countless places in between. His diversity and high energy leaves a mark few players can accomplish. He morphs into blues, gypsy jazz , country ,bluegrass, folk, rock, and other genres with a graceful ease. Doug is also an accomplished singer ,in his younger days studying opera. This accounts for his vocal range and harmony singing. The merging of academic sensibilities and on the job training of the American music scene has created a musician beyond compare.

Introduced by a mutual friend Bob and Doug first got together a few years back at an art show in the Adirondacks in upstate NY . After an impromptu concert around a campfire. The performance prompted an encore and the two musicians knew there was something special going on with the music. It has been many gigs later and the duo is still discovering and adding constantly to their vast repertoire. The common ground is deep between the two. Their live performances are filled with energy & excitement. Virtuoso playing and tight harmony are a signature trait. Live performances are full of excitement and emotion. This is what music is about.