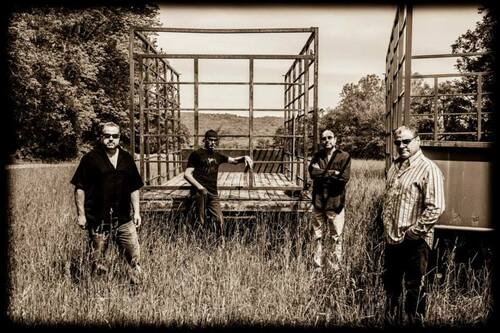 The Barn Cats  ... is a Band performing Blues, Funk, and Soul music.

Jan London-Guitar,
I've been playing guitar for 35 years. I studied early on with world class guitarist and teacher Arlen Roth in Manhattan. He taught me to look outside the blues, which was my passion, and learn to understand guitars relationship to other musical forms such as country, bluegrass, R & B, Funk, Folk, Cajun, and specifically how to serve the SONG.
This musical gumbo gave me the foundation that led from years as a blues sideman to 20 years in roots oriented jam band, Stir Fried http://www.stirfried.com/ . Being in Stir Fried afforded me the opportunity to tour alongside such brilliant musicians as Pedal steel ace Buddy Cage (New Riders of the Purple Sage, Ian and Sylvia) and fiddle legend Vassar Clements (Bill Monroe, Old and in the Way, Grateful Dead), Leo Nocentelli (The Meters), Commander Cody, Steve Kimock, Tom Constanten, Michael Kang, Jeff Wisor (David Bromberg Big Band, Bob Dylan & Mac Wiseman), & John Popper. Jan has recorded with artists as diverse as Derek Trucks, Bernie Worrell, Jo Jo Hermann (Widespread Panic), Buddy Cage, Dr. John, Tony Trishka, Vassar Clements as well as The Crackers & Barn Cats.

Jim Verdi: Drums- As well as being a drummer Jim has his hand in many aspects of the music industry.
Songwriting, engineering and producing are some of the talents he brings to the table. A few of his accomplishments are listed
below.......With the "Jon-Wite Group" recorded an album that produced two world wide dance hits and a six month European tour. With Michael McCartney co-wrote the original Arena football theme song for television. Engineered and co-produced the backing blues tracks that "Imus in The Morning" uses for his impromptu commercials. This music was performed by Little Sammy Davis and Midnight Slim. Currently on the cover of "Great Jersey Musicians" by Richard Hoynes available at Amazon.com.
Presently also drumming for "The Funk Junkies".....The legendary "Blackberry Blues Band" of Asbury Park....."30 Year Rookie"....."Counterfeit Cash"....."Mark Preston and the Traveling Men".....recording a 12 track album with "One Came Down"....."The Mojo Gypsies" and "DVR"......The "Hillbilly Drags" trailer on youtube has "DVR" performing through out.

Tom Rausch- Bass, Vocals- What can we say about Tommy....In the pocket !! "The Rausch Brothers Band was THE band around Sullivan County as long as I can remember", says Barn Cats rhythm guitarist, John Rocklin. Tommy also Played in many other exciting projects including 30 Year Rookie with Mike Ciliberto of The Blues Magoos and currently also plays & sings in the 12 pc. group, "The Funk Junkies". as well as The Mojo Gypsies.

John Rocklin- Guitar, Vocals- I came out of a Folk/ Country/ Americana background leading the band "The Crackers through many years and configurations, ( Always with Jan !!). I learned about music though in a real way from Little Sammy Davis who was just an incredible world class Blues Harmonica player and vocalist. Sammy's Bandleader, Fred "Midnight Slim" Scribner was my teacher on guitar although I was probably a terrible student. What started with me hanging around all the time turned into a passion that I could not live without. I love being part of the Barn Cats and what we have accomplished over the years. ( Funking it up since Jan. 2015)

Videos
Everybody's Got Something to Hide