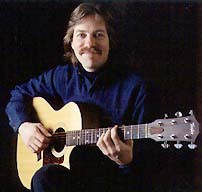 "It's as close as I can possibly imagine to having a calling," says Woodstock musician Eric Erickson of his career as a singer/songwriter. "It's something I can't not do. I've worked as a microbrewer, as a folk broadcaster (a member of the staff of the original, legendary WDST) and as a carpenter, among other things, but I have always wound up back on a stage somewhere, with a guitar in my hands."

The son of a career Army officer, Eric spent much of his childhood at West Point. His teenage years included classical guitar lessons the requisite rock 'n' roll bands. And now, in his mid-forties, Eric finds himself as an emerging artist. "It's an interesting position to be in: I can have a blossoming career and a mid-life crisis at the same time! It gives me a unique perspective and unlimited fodder for songs."

As Eric puts it himself, "It is not my intention to break new ground or to be on the 'cutting edge'. I'm happy to use the tools that have been developed over the past several hundred years of songwriting. I hope each of my songs has the feel of a pair of new shoes that are comfortable from the moment you first put them on. You've worn the style before but never in quite this color."

The list of performers with whom Eric has shared the stage includes Pete Seeger, Livingston Taylor, Suzanne Vega, John Hall, Happy and Artie Traum, acoustic guitar master Adrian Legg, Priscilla Herdman, Rick Danko of the Band, Tom Chapin, Ronnie Gilbert of the Weavers and the British group Fairport Convention. One of Eric's songs was included on the compact disc that accompanies the Fast Folk Musical Magazine.

Eric's musical perspective has been further enhanced by his participation in the a capella vocal ensemble Woodstock Renaissance. The group specializes in secular and sacred music from the Renaissance and Middle Ages and performs concerts twice a year. Eric has sung tenor with Woodstock Renaissance since 1982. "People have told me that they hear the sound of early music creeping into my songs although that has not been a conscious decision on my part. It is something I intend to explore more fully in the future," Eric says.

A member of the original air staff of WDST-FM in Woodstock, Eric was instrumental in establishing the station's legendary status. He brought a new audience to American folk music as cohost of the long-running "Jus' Folks" program. And an entire community of listeners would stay up all night to hear Eric's overnight show.

Now living in the Woodstock area, Eric has two albums under his belt. He says, "I love the 'dual life' the songs take on between their recorded and live incarnations: There's the 'definitive version' on the record as opposed to the fact that every time I perform a song live, it's a little different."

Peter Yarrow of Peter, Paul and Mary brought things full circle when he said, "Eric is a warm, wonderful performer. His songs carry on a marvelous tradition that we gratefully inherit."