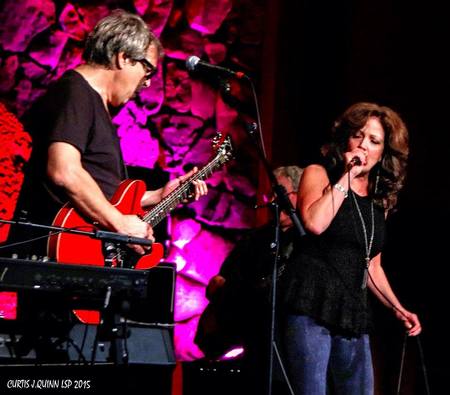 Coming back from a long hiatus away from the music world, WHUD- FM Spotlight Artist ,LaurieAnne has partnered once again with her former bandmate, Fred "Midnight Slim" Scribner. Scribner has quite a bio being the former member of the Levon Helm band and recording with many blues legends such as Buddy Miles, Tom Jones and Donald Fagan . He is known for his guitar-driven blues as the "house band" for nearly 20 years for IMUS in the Morning Show on MSNBC. In 2014 he was inducted into the NY Blues Hall of Fame. Fred was also the curator at Bethel Woods in charge of the Blues At Bethel events.

LaurieAnne knew Fred in the 80's when he played in her band and after some coaxing, she decided to give music another shot after a 28-year haitus. She has also proven to be quite the songwriter ~~ LaurieAnne has 2 albums of original music and has received several awards for her songwriting skills by placing Finalist and Semi Finalist for her song "Feels Like Home" from her first album. Her second album, Small Town Girl, a 4-song compilation proving once again that she has evolved as an amazing singer/songwriter, can be heard on Pandora Radio. She has debuted her songs at the Falcon Arts, West End in NYC and Bethel Woods.

Midnight Slim & LaurieAnne aim to please covering classic rock, country, blues and originals ...Experience red- hot ferocity on electric guitar then buckle up as LaurieAnne transforms seamlessly from a Patsy Cline tribute to Bonnie Raitt. This self-contained show will take you on a musical journey that is quite extraordinary ~

The duo perform all around the Tri-State area as well as being the summer house band at Villa Roma Resort.


· " THE GREATEST GUITAR
PLAYER IN THE WORLD" - GAVIN DEGRAW

· “ WHAT YOU HAVE IN THAT GUITAR? IT WONT DO ME ANY GOOD WITHOUT THE FINGERS”- TOM JONES

· " LAURIEANNE HAS A BEAUTIFUL VOICE WITH THE LOOKS TO MATCH " - KATHY MILLAR, WHUD- FM