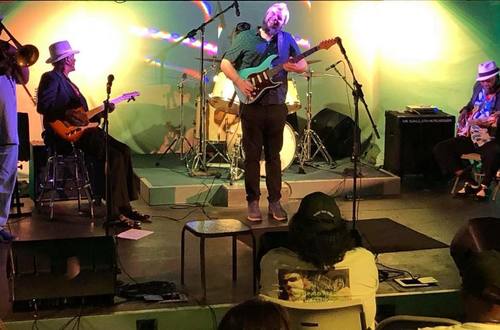 Hudson Valley’s very own “Guitar Hero”,Chris Raabe, has been moving and entertaining audiences for over a decade. This passionate artist has roots in genres of Soul and Rock however, when it comes to the Blues Chris is in a league of his own. Time and time again he delivers soulful and colorful performances that keep his listeners on the edge of their seats. Chris captivates his listeners with harmonious guitar playing and unique vocal qualities. Gathering influence from an array of different artists and genres, Chris has developed his own unique sound. His music offers a front-row seat to blues-based emotions further revealing his message that music is spiritual and has the power to influence and transport the listener.

Born and raised in Orange County, Ny, Chris grew up with a deep love and respect for music . His parents took notice and nurtured his passion. They bought him his first Ibanez starter electric guitar for Christmas when he was 16 years old. He was always enamored with the guitar, but it was not until hearing local Blues Icon Bill Perry pour his heart out in a downtown Middletown Club that he fell in love with the Blues. While in college, one of the music instructors overheard Chris playing and singing, in what he thought to be a private moment. It was this instructor’s encouragement and guidance that gave Chris the confidence and courage to follow his dream. Chris decided to move on from College where he was studying art, and decided to pursue music. Since then Chris’s focus has been in connecting with his listeners through catching a vibe and making music that is approachable and universal. Chris’s musical influences include Joe Bonamasa , John Mayer , Bill Withers , B.B. King , Marvin Gaye , Stevie Wonder , Sean Costello , Josh Smith , Slam Allen , and just about anyone that grooves and comes from a “good” place.

Chris Raabe has had pleasure of opening for the great Leon Russell , Eric Gales , Papa Chubby , Slam Allen , Nick Moss , Jake Holmes , Little Sammie Davis and members of The Frank Zappa Band. The Chris Raabe Band is a power trio consisting of Eric Winter on Bass and Vocals , Kenrick “El Malo” McBean on the drums and Chris Raabe on Guitar and Lead Vocals. They have become an entertainment staple in the Hudson Valley and are always drawing in more fans each time they play. Currently the band is focusing recording. Chris recently debuted his first single, “Fool” which can be heard on Soundcloud. Chris and the band have been working tirelessly in hopes of releasing new material in 2019. “I play music because thats whats in my heart. I cant imagine doing anything else with the same love ,passion and integrity that i put into my music.” -Chris Raabe