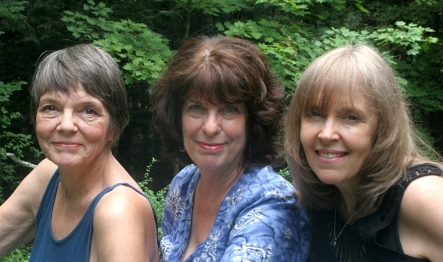 The Cupcakes  ... is a Trio performing Acoustic, Americana, and Folk/Traditional music.

Recipe for The Cupcakes: Start with 3 uber talented women; add 5-6 instruments, (3 at a time); then cream together with a bouquet of awards for songwriting and independent music. Stir in 6 CDs, sprinkle with jingles, tours with famous people, production credits, and videos. Ice the whole thing with humor and harmony. No need to bake- The Cupcakes definitely do the cooking!Janice Hardgrove’s first memory with music goes way back to singing harmony on such songs as "By the Light of the Silvery Moon" with her grandfather at the age of 4. She grew up to become a jingle singer and, for over a decade, she sang national jingles for everyone from McDonald's, to Diet Coke, AT&T, Burger King, Pepsi, and on and on. As co-owner of London by Night Productions, she co-produced and arranged albums for John Gorka, Christine Lavin and Lucy Kaplansky, as well as scoring numerous national videos for Ricoh, At&T, and Schick, among others. Her song "Chamomile Flowers" is archived in the Smithsonian Institution. She also received 2 honorable mentions in Billboard's International Songwriting Competition in 2009. Currently she is working on her "Saturday Morning Songs" album, singing with the Dharma Bums and most notably performing with The Cupcakes!Lyn Hardy has performed folk, rock, old time, contra, blues, and country music in the USA, Canada and Europe since 1965. She has toured and recorded with Jay Ungar, The Putnam String County Band, Cat Mother and the All Night Newsboys, and David Bromberg. Lyn formed and wrote most of the songs for Rude Girls, an eclectic all woman band renowned for their beautiful, outrageous and humorous music. Their first album, “Rude Awakening” (Flying Fish/Rounder Records) earned a “NAIRD Award” (National Association of Independent Record Dealers) for Best String Band Album. Lyn’s song, "The Ballad of Francine Hughes” was chosen by the Smithsonian Institution for the “Folk Song America- A 20th Century Revival” collection, and Ronnie Gilbert recorded Lyn and David Hornung’s, "Girl in the Red Velvet Dress.” Lyn has six albums to her credit, and in addition to being a Cupcake, she plays with her daughter Ruth Merenda, cellist Abby Newton and her daughter Rosie Newton in the Mother Daughter String Band.. Elly Wininger got her start in the NYC Folk Revival scene playing blues and ragtime guitar in the basket houses of Greenwich Village. She played opening night at CBGB and performed there regularly and in other NYC venues such as Kenny’s Castaways, Dr. Generosity’s, Folk City & the Bitter End. She was a 2010 Official Showcase Selection at the Folk Alliance Midwest Conference and a 2010 Songwriting Competition Finalist at the Susquehanna Music & Arts Festival. In 2008 Elly was a Folk DJ’s Choice at the Northeast Regional Folk Alliance, and she has Honorable Mentions from the International Songwriting Contest and Song of the Year. Elly’s 2 most recent CDs: “Back Eddy Blues” and “Part Time Paradise” have received widespread radio play and critical acclaim. When Elly is not being a Cupcake, she hosts a live Webcast variety show: "Catskill Cabaradio” and plays with the Dave Kearney Trio.