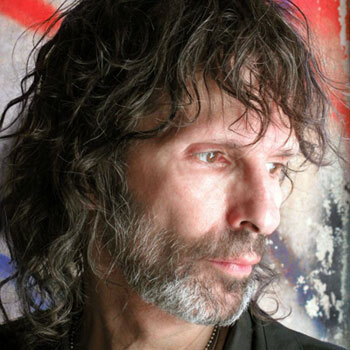 Charles Lyonhart grabs the audience's attention as he paints vivid images of a life in despair struggling to understand the complexities of a dark and seductive world. ".... a genuine voice and one who should be heard" - The Kingston Freeman

Charles was born in the Bronx where Poe Cottage became a shrine and its late author an inspiration. The 60's brought him in touch with the truths of Lenny Bruce, and most tellingly, the words and music of both the Beat Generation and the Folk Rock movement. In the course of his experiments with music, writing and counterculture living, Lyonhart met icons such as William Burroughs, Allen Ginsberg, Bob Dylan, and Tim Hardin. Making his way through the 70's and 80's sometimes on stage, other times as a writer and music critic for publications like Rolling Stone Magazine, he eventually turned to his true talents in life - a visionary songwriter and seasoned guitarist. In the 90's Charles became a regular at The Tinker Street Cafe in Woodstock, The Bitter End in New York City and various local music festivals. Gaining a loyal regional fan base, the name Lyonhart has quickly become synonymous with emotionally charged ballads delivered with brooding intensity backed with exceptional melodic arrangements. Whether he's playing with his band or solo acoustic, his live performances effortlessly showcase the solid craftsmanship as a truly accomplished artist with poetic blended narratives accompanied by rich acoustic textures and distinguishing vocals.

After appearing at the Woodstock 25th Anniversary concert in 1994, he was soon signed to Continuum Records and two of his compositions were chosen for their 1995 compilation "New Music from Woodstock, New York." with over 900,000 copies sold worldwide. In June 1997 his self-released debut album "Leap of Faith" was well received, selling over 7,500 copies through his website and concerts. He garnered critical praise both in the press and by fellow musicians. John Herald titled Charles "one of the best singing songwriters" he's come across in ten years.

Recorded mostly live with guitarist Steve Raleigh, his next album "Exception to the Rule" soon followed. Singer/songwriter Richard Shindell recorded Lyonhart's classic "Shades of Black, Shades of Blue", a tribute to the legendary Thomas Jefferson Kaye. Signature Sounds released Shindell’s version in early 2000 as part of a special 4-song EP entitled "Spring". Charles’ CD, “Down To The Hard Line” was released in 2001 before he became ill taking him out of the circuit for the next eight years. “Down To The Hard Line” was recorded with his friends and collaborators, Larry Campbell, Lincoln Schleifer and Denny McDermott. From the quietly powerful words of "Days Gone By" to the screaming rock and roll rhythms of his insomnia ballad "Any Price For Sleep", this careful artistic blending of various creative layers has yielded the very best of all those involved. Even though Charles was out of the loop after the release of “Down To The Hard Line” this CD was called “his best” by many critics. Charles’ sicknesses lead to his liver transplant in 2005. Charles returned to performing in 2007 and began writing songs for his next CD.

Almost five years now since his liver transplant, Charles Lyonhart is alive and well and has made his home in Phoenicia, NY. His new CD "Outside Looking In" was released on 11/14/09 produced by the multi talented Julie Last. The CD includes his working band “The Junkyard Angels” that consists of Chris Zaloom, Dennis Cotton, George Quinn, and Larry Packer.