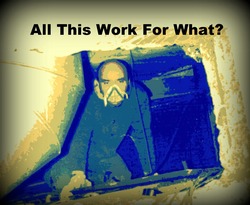 Walk With You
Gas Station Roses  Irish Girl
All This Work For What
Americana, Country, and Blues
by Pleasant Bud

Track Listing:
01. If I Wouldn't Have Friends
My pandemic song. I played it in its raw state on a LIVE session and people liked it
so I recorded it.
02. Walk With You
Just another love song. Pretty much what I do.
03. Gas Station Roses
Many people call this their favorite PB song. I also had this on my previous release "Just Another Songwriter". Different arrangement here though.
04. And
This one has been recorded three times, all somewhat differently.
05. I Could Leave You
This one's more about lust
06. Irish Girl
I'd been meaning to write this one for many years, since we went to Ireland in 2012. Beautiful Irish girls are so much my favorite that I married one. And
This one has been recorded three times, all somewhat differently.
07. Another Song For You
Again, a previously recorded piece from my unreleased " Love, Lust and Other Things". Had gotten some radio interest with this one. Just as quickly no interest.
08. Victim Blues V1
Yes there is a V2. Very different though.
09. The Sinner
A confession song, mostly true.((Actually most of my songs have a fair bit of truth in them)). This was the first song I wrote as an "adult". I went to a Christian coffee house and watch people performing songs about their shortcomings. I have plenty of those.
10. Morning Eyes
Another song about my sweetheart. This details the reason I was late for work most days.

How to buy All This Work For What