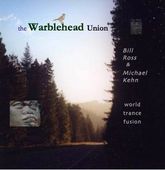 Music performed mostly on, like Mr. Hart says, "the Original Instruments": the Drum and the Voice. All about a feeling.

A long-gestated product of a loose federation of musicians who've played together for many years, performing original World fusion, slightly new age-y Roots Music, with the jazz and classical influences occasionally popping up.

Recorded by Dave Cummings at Bluetone Studios in Somerville, Mass. (except the live tracks, from a performance at the Acorn Art Gallery, Marblehead, Mass., July 2003)

How to buy The Warblehead Union