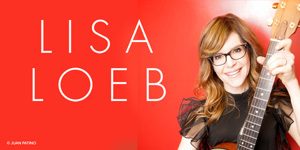 See 1990’s pop icon Lisa Loeb who recorded the platinum-selling hit “Stay (I Missed You)” from the film Reality Bites perform solo, live and in-concert, for one night only.

Dallas native Lisa Loeb is a 2018 GRAMMY Award-winning singer songwriter, touring musician and philanthropist who started her career with the platinum-selling hit song “Stay (I Missed You)” from the film Reality Bites. A trailblazing independent artist, Lisa was the first pop musician to have a Number 1 single while not signed to a recording contract. She followed that remarkable feat with several hit singles and six albums, two of which were certified gold.