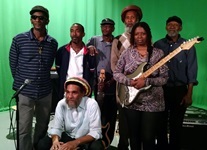 AYAASO is a Roots Reggae Band that has performed at Africa House and numerous other venues in and around New York City and upstate New York. The band can be seen on BRIC TV on TradingPhotos.com in Brooklyn. NY

AYAASO started in the fall of 2003 with Asante Blue on keyboards and vocals, Fes Williams on bass, Bill Bojangles on vocals. A year or so later came Steady Demmings on drums and now also includes Eric Toussaint on keyboards and Andrea Green on guitar.

AYASSO debut CD, A Brighter Day gets airplay in New York, Nevada, Florida, Jamaica, St. Kitts/Nevis, the Eastern Caribbean and on internet radio. The album has fifteen songs including the fans favorites Golden Sun, Blessed Is The Man, Marcus Garvey, Welcome To New York and the Ska instrumental Crush Pepper.